Network Configurations – Let us start out with the very basic Ad-hoc network, in which users connect directly to each other.

With the Add-hoc network it is possible to connect more than two stations, if each station is using a omni antenna (all direction) all stations can hear the others when within range.  But what happens when one is out of range of the others? 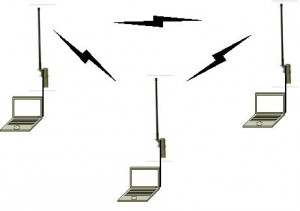 A new digital project is coming up that will provide a method to push digital radio traffic to SIP / IAX2 phones as well as PSTN. Testing is in progress now, more details coming soon.

2 ) Long range HSMM networks with data/video/voice capabilities. (With products like the Ubiquiti Networks Bullet [ubnt.com] should be able to get some decent range)

3) Low-cost Digital Interface that can plug into any radio with a data port (most new radios have a data port present, plus by regulation {at least for Part 90 equipment} they have to be able to handle at least 4k8 baud data – definitely not high speed, but it lets messaging take place).

4) Compact Rapid Deployment Links (RaDL) based on Asterisk that can be quickly delivered to any location thus providing phone and radio connectivity. ** Come up with a way to do it with the Gumstix Overo boards everything could fit in a radio. Add a Ethernet pigtail on the back of the radio one would have access to local SIP/IAX2 phone capabilities plus the radio could provide long-haul capabilities for at least one call to the outside world. Instant dispatch capabilities with the package too, along with intertie to other radio systems.**

The radio itself would work as a link/remote base anyone in the local network could connect through the LAN/wLAN to the RF side to transmit/receive via the radio itself. Plus they would still have local network capabilities. Since the original gumstix/Asterisk package was able to handle 10 to 15 calls, the new package should be able to increase that by at least to 15 to 20 calls.  Attach another wLAN to the RaDL would create another sub-network as well as capability for a second RF Gateway channel.

The Digital Analog Radio Network is near.

DARN defined as “to mend by weaving thread across a gap” that is what is being done. Those that want to see flexibility will go with the DARN approach, as a improvement while there will be others that find it to be just annoyance. DARN definitely fits the new Digital Analog Radio Networks.

Sometimes logic can indeed be simple (send in most potentially linkable exchange).

High Speed Multi Media (HSMM) is often referred to as being the Hinternet (Ham Internet), as it is primarily used under FCC Rules & Regulations Part 97. Under Part 97 commercial off-the-shelf equipment can be used at higher power and higher gain than the more common Part 15 802.11a/b/g operations.

The primary purpose for HSMM and Hinternet is to augment emergency communications via long range high speed wireless data networks that can handle voice, data and video communications. HSMM can also be used in the day-to-day aspects of Amateur Radio Communications.

With the rapid expansion of Asterisk PBX into the relm of radio communications the added flexibility of having a wireless linking system has also expanded.

By integrating HSMM along with Asterisk PBX a truly transportable network can be delivered to any location where communications is needed, with voice, data and video all being available to the agencies and organizations being supported.

Just like other living things there are good and bad times for dynamic paths that are taken.

One can opt to be static yet knowing dynamic paths will move you.

What does this mean to those that work in the area of emergency response?

Be flexible with the methods that are used, yet maintain the basic standards that allow a incident operation to be conducted safely. Standards which remain static can be used as a basis for operation integrity and also represent a road map to a successful mission.

Every situation, every incident is different, thus the need for being dynamic in operational style. At times incidents will take place that are not amongst the normal operational situations. This indeed is one of the times that we need to be dynamic in readiness and response.

Flexibility is a key ingredient to readiness and the all hazard approach to emergency response and planning.

As a organization which path are you opting for: static or dynamic flexibility?

Some may remember the days of 1200 baud packet that was quite popular in the 1990s. This technology is now present in APRS, with even a hint of low-speed data showing up within the VHF and UHF bands via D-STAR enabled radios as well as telemetry.

For those that have radios such as the Icom ID-1 it is possible to have 100kbps data from the Internet available in your vehicle. In order to do this a base station with a ID-1 or a D-STAR 1.2GHz data repeater is required.

Most of us have some form of a wireless network in our home or business that operates via the 802.11 standards. Did you know that this same equipment can be used in Amateur Radio with higher RF power and higher gain antennas? Within Amateur Radio this technology is known as High Speed Multi Media or HSMM. The primary bands for HSMM are 2400, 3300 and 5800 MHz. The 902 MHz band can also be used for high speed data. One of the key advantages to HSMM is in its nature of being able to take a off-the-shelf wireless network adapter and access point add a higher gain antenna to them, and for longer range RF amplifiers can be added under FCC Part 97 rules.

Imagine having access to high speed video, IP-phone and Data Connectivity in your vehicle,or during special events and emergency incidents being able to provide data, video and voice to the agencies served. As well as providing last mile coverage into a disaster area.

Did we mention telephone service? With the development of Internet telephone services as well as telephone servers such as Asterisk which provide flexible interoperability between PSTN, Internet Phone and Radio dial tone can be presented along with the last mile capabilities of High Speed Multi Media create a resource that can be highly beneficial to the community and the nation.

What is next in the Digital Frontiers? As it was in the 1800s with the migration West the same is occurring with the digital migration. With networks such as Asterisk the migration is made easier as analog and digital technology is made one.

It's all about being ready.